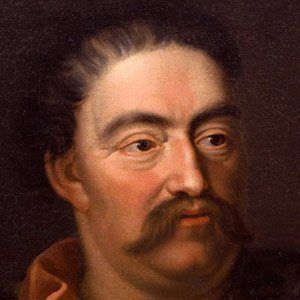 Remembered for ruling during a stable period in the history of the Polish-Lithuanian Commonwealth, this seventeenth-century regent served from 1674 until 1696 as both Grand Duke of Lithuania and King of Poland. A popular military leader in several battles against the Ottoman Empire, he earned the nickname of the "Lion of Lechistan."

He was born in Olesko, Poland (present-day Ukraine) to noble parents Jakub Sobieski and Zofia Teofillia Danilowicz. He graduated from Jagiellonian University in the mid-1640s.

He is perhaps most famous for his 1683 Battle of Vienna victory.

He was a contemporary of English King James II.

John III Sobieski Is A Member Of