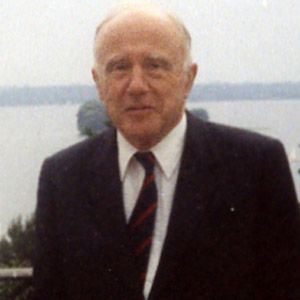 Influential Princeton University physicist who worked with Neils Bohr and Albert Einstein on atomic theory and helped with the development of the atomic bomb as a part of the Manhattan project. He is also noteworthy for coining the terms quantum foam, wormhole, and the phrase "it from bit."

He developed an early interest in science from reading scientific publications, and went on to earn his doctorate at Johns Hopkins University in Baltimore, Maryland.

In addition to his work on atomic theory, he studied the results of gravitational collapse in stars and coined the term 'black hole.'

He grew up in Jacksonville, Florida, both of his parents were librarians.

He, Niels Bohr and Enrico Fermi pioneered the theory of nuclear fission, by which atomic particles splitting released massive amounts of energy, leading the way for the creation of atomic weapons.

John Archibald Wheeler Is A Member Of