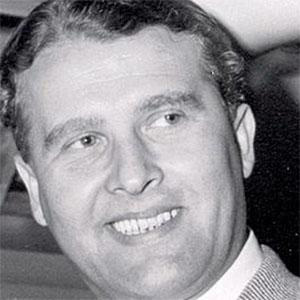 One of the greatest rocket scientists ever who, early on in his career, played a key role in Germany's rocket development program. While working for NASA, he played an integral role in the development of the Saturn V booster which later helped to land the first Americans on the moon.

He was a talented musician who committed Beethoven and Bach to memory.

He is credited as being the "Father of Rocket Science" and in 1975 he received the National Medal of Science.

He married Maria Luise von Quistorp, his cousin on his mother's side, on March 1, 1947. He and Maria had three children together.

He was a rocket scientist as well as a accomplished amateur musician who could play Ludwig Van Beethoven and Bach from memory.

Wernher Von Braun Is A Member Of