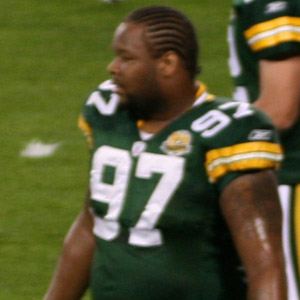 Defensive end who was a 6th round pick of the Green Bay Packers in 2006, and became a starter for the team in just his second season; played college football at Texas A&M, where he led the nation in tackles in 2003.

At Forest Brook High School in Houston, Texas, he was a three-time All-District selection as a defensive lineman.

He was arrested in 2008 and 2011, and missed five years of football while battling charges, but he was reinstated in 2013 and earned a spot on the Packers' roster.

When he returned to Green Bay in 2013, he joined Clay Matthews on the team's defense.

Johnny Jolly Is A Member Of