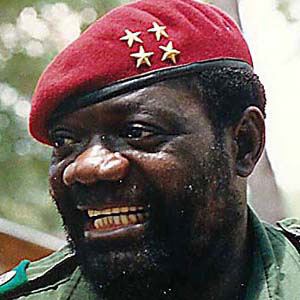 Guerrilla warfare leader, political figure, and founder of the National Union for the Total Independence of Angola (UNITA) political party. He was killed in 2002 in the Angolan Civil War.

After studying in Portugal and Switzerland, he gradually became involved in Angolan independence movements and eventually undertook military training (including guerrilla warfare tactics) in China.

He was the object of close to fifteen assassination attempts.

He had numerous wives and fathered close to thirty children.

As a young man, Savimbi was recruited to the cause of Angolan independence from Portugal by Angolan revolutionary Holden Roberto.

Jonas Savimbi Is A Member Of