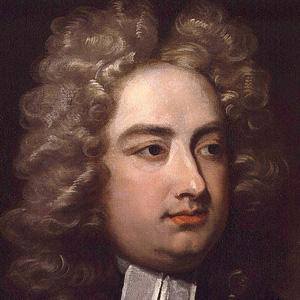 Irish author of the satirical Gulliver's Travels and the famous essay, A Modest Proposal. He also served as Dean of St Patrick's Cathedral, Dublin.

He attended Trinity College, Dublin, where he earned his Doctor of Divinity degree. He subsequently became an ordained priest in the Established Church of Ireland and was assigned to the prebend of Kilroot in the Diocese of Connor.

In A Modest Proposal, he satirizes the British with an argument that supports the ingestion of human infants.

He was born in Dublin to Jonathan Swift and Abigail Erick, and his education was funded by his uncle, Godwin Swift. He is speculated to have married Esther Johnson in 1716.

His uncle, Thomas Swift, married a daughter of the poet and playwright, Sir William Davenant, a godson of William Shakespeare.

Jonathan Swift Is A Member Of