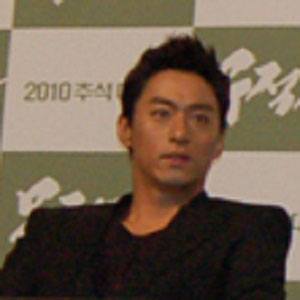 South Korean actor who rose to fame through is role in the box office smash Happy End in 1999. He has since gone on to win awards for his work in television series like Fashion 70's and films like 2008's A Frozen Flower.

He was born in Seoul, South Korea and played small roles in films like 1997's Park vs. Park before landing his first lead role as a dancer in Dance Dance in 1999.

He sang a cover of Kim Hyun-sik's "Like Rain, Like Music" at a fan meeting at Nakano Sun Plaza in Tokyo and later released a released cover of it in September 2011.

His birth name is Park Jin-tae. His stage name is borrowed from his manager.

He co-starred with actress Lee Yo-won on Fashion 70's.

Joo Jin-mo Is A Member Of