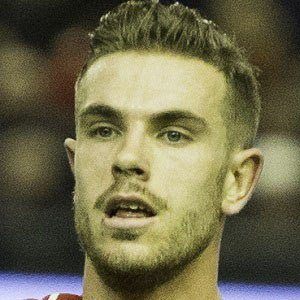 Midfielder who joined Liverpool in 2011 and was named England's U-21 Player of the Year in 2012. He became a member of the English national team in 2010.

He made his professional debut with Sunderland in 2008 and also spent time on loan to Coventry City.

He played for England's U-21 team in the 2011 European Championships.

He was born in Sunderland, England. He married Rebecca Burnett. He and Rebecca have two daughters named Elexa and Alba and in 2020, they welcomed a son.

He was teammates with Steven Gerrard on Liverpool and took over the latter's captaincy in 2015.

Jordan Henderson Is A Member Of