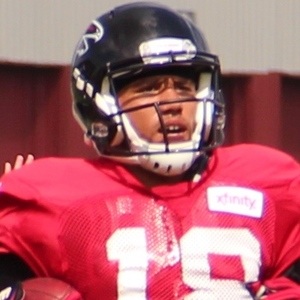 American football wide receiver who signed with the Minnesota Vikings as an undrafted free agent in 2015. He was cut during the preseason and spent time with the Jaguars and Falcons later in the year.

He played his last year of college football at Brigham Young University, finishing second on the team in catches, yards, and touchdown receptions.

He spent his first three college seasons at the University of Texas-El Paso, leading the team in receiving as a junior and sophomore. He joined BYU as a graduate transfer after receiving his degree in electrical engineering from UTEP.

He was born to Michelle and Michael Lambert. He grew up with six half-siblings.

He and future NBA player Jimmy Butler became friends during the latter's senior year of high school, and Leslie's family ultimately took the homeless Butler into their home.

Jordan Leslie Is A Member Of