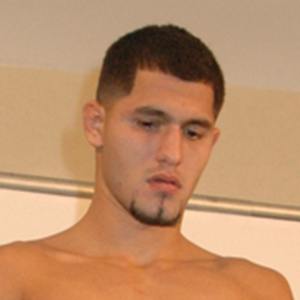 Mixed martial artist who made his Ultimate Fighting Championship debut as a welterweight in 2013 and has earned Performance of the Night honors multiple times. He previously boxed professionally and became an AFC Welterweight champion.

He grew up in Miami, Florida and wrestled at St. Brendan High School.

YouTube videos exist of him participating in a street fight against a Kimbo Slice associate named Ray. In July 2019, he set the record for the fastest UFC knockout in history, 5 seconds, by landing a flying knee on Ben Askren's right temple.

His father is Cuban and his mother is Peruvian. He has two daughters and a son with his ex-girlfriend.

In November 2019, he defeated Nate Diaz and he was presented with the BMF belt by Dwayne Johnson.

Jorge Masvidal Is A Member Of