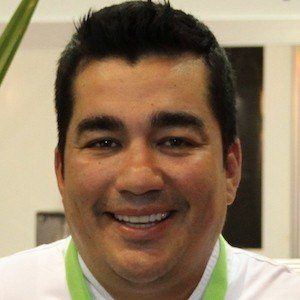 Ecuadorian-American chef and restaurateur most famous for having won the second season of the Food Network reality series The Next Iron Chef. He made his official debut as The Iron Chef in January 2010.

He graduated from Gordon Tech in 1990 and later studied Culinary Arts at Kendall College in his hometown of Chicago, Illinois.

He received the James Beard Award for Best Chef: Mid-Atlantic.

He married a woman named Beatriz in 2002. He has a daughter named Olivia and a son named Andrés.

He defeated Bobby Flay on an episode of Iron Chef America in 2008.

Jose Garces Is A Member Of