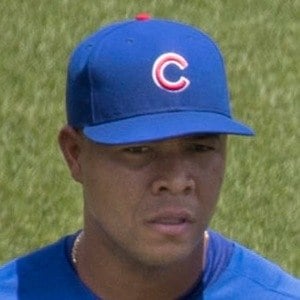 Left-handed starting pitcher who made his MLB debut with the Chicago White Sox in 2012 and was named to his first MLB All-Star Game in 2016. He was traded to the Chicago Cubs midway through the 2017 season.

He originally signed as an international free agent with the New York Mets in 2006.

He pitched for the Colombian national team at the 2017 World Baseball Classic.

He was born to Abel Quintana and Maribel Guardo Polo.

He was teammates with fellow All-Star pitcher Chris Sale on the White Sox.

José Quintana Is A Member Of