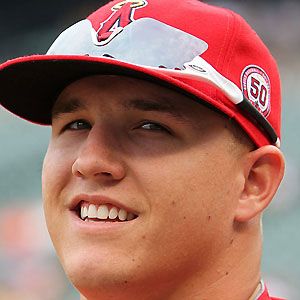 All-Star outfielder who earned the American League MVP award in 2014, 2016 and 2019 as a member of the Los Angeles Angels. As a rookie in 2012, he led the AL in runs scored and stolen bases and received the AL Rookie of the Year Award. He is known for his fielding prowess and versatility at the plate.

He was named the Minor League Player of the Year in 2010.

Stephen Strasburg was selected first in the 2009 draft, while he was chosen twenty-fifth.

He began dating Jessica Tara Cox in high school. He and Jessica welcomed their first child, a son named Beckham Aaron Trout, on July 30, 2020. His dad, Jeff, was drafted by the Twins in 1983.

He joined star slugger Albert Pujols on the Angels in 2012.

Mike Trout Is A Member Of