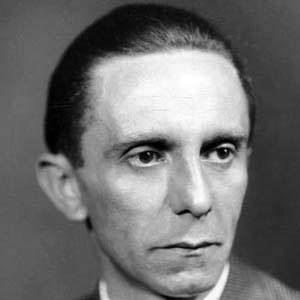 Reich Minister of Propaganda for Nazi Germany and one of Hitler's right hand men who completely controlled and regulated art an culture in Germany. He was one of the more anti-semitic members of Hitler's posse and he was one of the main architects of the Final Solution.

He earned his Ph.D. form Heidelberg University in 1921.

He organized attacks on German Jews, commencing with the one-day boycott of Jewish businessmen, doctors, and lawyers and culminating in the Kristallnacht (Night of Broken Glass) assault of 1938, in which scores of synagogues were burned and hundreds of Jews were assaulted and murdered.

One day after taking office as the Chancellor of Germany on April 30, 1945, following Hitler's suicide, he killed his six young children and committed suicide himself with his wife Magda.

He served as the Minister of Propaganda under Adolf Hitler from 1933 to 1945.

Joseph Goebbels Is A Member Of