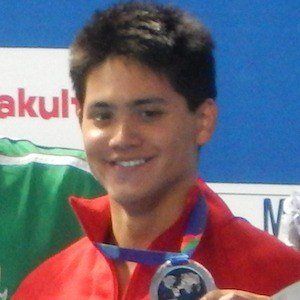 Specializing as a butterfly, freestyle and individual medley swimmer, he became the first Singaporean athlete to ever win an Olympic gold medal after placing first in the 100 meter butterfly at the 2016 Olympics.

He just missed qualifying for the 2012 London Olympics at the 2011 Southeast Asian Games.

He became a national record holder after beating a 33 year old record in the 50m freestyle previously held by Singapore swimming legend Ang Peng Siong. He took home a silver medal for the 100m butterfly event at the 2014 Glasgow Commonwealth Games.

He is a third-generation Singaporean of Eurasian ethnicity born to parents May and Colin Schooling and raised as an only child.

He defeated his longtime idol, American swimmer Michael Phelps, in the 100 meter butterfly at the 2016 Olympics.

Joseph Schooling Is A Member Of