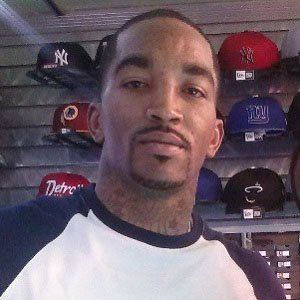 NBA shooting guard known for his streaky three-point shooting. He was named the NBA's Sixth Man of the Year with the New York Knicks in 2012 and in 2016, he helped lead the Cleveland Cavaliers to an NBA Championship.

He played in the McDonald's All-American Game in 2004 after a solid career at Saint Benedict's Preparatory School in Newark, New Jersey. He was selected 18th overall by the New Orleans Hornets in the 2004 NBA Draft.

During the 2011-12 NBA lockout, he played for the Zhejiang Golden Bulls in the Chinese Basketball Association.

He played basketball overseas in China and had his mom visit often. He married Jewel Smith and he has two daughters.

He was teammates with Carmelo Anthony on the Knicks from 2012 to 2015.

JR Smith Is A Member Of