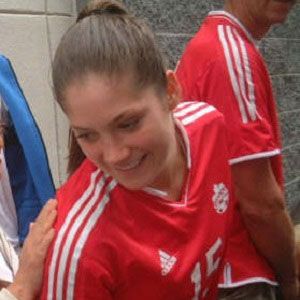 Soccer forward who represented Canada at the FIFA Women's World Cup in 2003, 2007 and 2011. She won the Cyprus Women's Cup and CONCACAF Women's Cup in 2010 and made the transition to analyst for Rogers Sportsnet the following year.

She was born in Calgary, Alberta and grew up in Oakville, Ontario. At age 15, she became the youngest woman ever to be named to Canada's national women's team.

She retired in 2011 but attempted to make a comeback to help Canada in the 2015 FIFA Women's World Cup. Her comeback was ended by the news that she was pregnant with her first child.

In 2015, she became engaged to professional baseball player Ricky Romero. The couple later married. Together they have a son.

She played alongside Canadian team captain Christine Sinclair at the 2008 Summer Olympics.

Kara Lang Is A Member Of