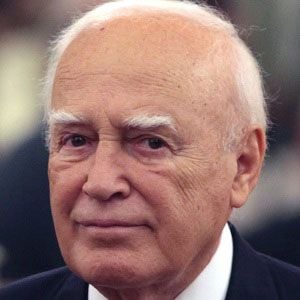 In 2005, after serving two terms as his country's Minister of Foreign Affairs, this Panhellenic Socialist Movement politician took office as President of Greece.

His pre-presidential political offices include member of the Greek Parliament for Ioannina, Alternate Minister for National Defense, and Minister for Foreign Affairs.

The son of military man Gregorios Papoulias, he grew up in Ioannina, Greece. His marriage to May Panou resulted in children named Anna, Vicky, and Fani.

He assumed the Greek presidency under the prime ministerial administration of Kostas Karamanlis.

Karolos Papoulias Is A Member Of