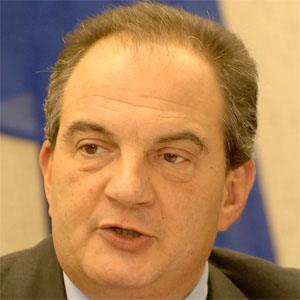 This member of the New Democracy Party served two terms as Prime Minister of Greece during the middle of the first decade of the 21st Century. From 2004 until 2006, he also served as Greek Minister of Culture.

After taking classes at Deree College and at the University of Athens Law School, he earned an advanced degree in political science from Tufts University in Massachusetts, U.S.A.

He was criticized for his government's slow response to the widespread Greek forest fires of 2007.

His marriage to surgeon Natasa Pazaiti resulted in two children: Aliki and Alexandros. His uncle Konstantinos Karamanlis, the founder of the New Democracy Party, also served as Prime Minister of Greece.

He and fellow New Democracy Party politician Antonis Samaras both held office as Prime Minister of Greece (Samaras was elected in 2012).

Kostas Karamanlis Is A Member Of