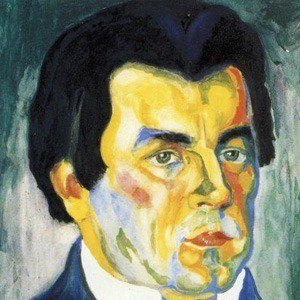 Abstract painter associated with Suprematism and known for "Black Square," "White on White," and other geometric works. He was hired by Vladimir Mayakovskiy and Vsevolod Meyerhold to decorate "Mystery Bouffe," their 1918 play.

He attended the Moscow School of Painting, Sculpture and Architecture from 1904 until 1910. He was featured in the Soyuz Molodyozhi's second and third exhibitions in 1911 and 1912.

He created the theatrical set for the opera, "Victory Over the Sun," from 1913.

He was born to Ludwika and Seweryn Malewicz, who were ethnic Poles forced to flee the Kopyl Region of Belarus following the January Uprising of 1863. He grew up with 13 siblings.

His art work was featured in the film, "Melancholia," which starred Kirsten Dunst.

Kazimir Malevich Is A Member Of