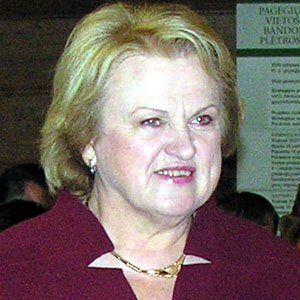 Member of the Lithuanian People's Party who held office as Lithuania's first female Prime Minister from 1990 to 1991. She has led the Peasants and New Democratic Party Union.

She worked briefly as an instructor at Vilnius University, after graduating from the school in 1965.

She has served as Lithuania's Minister of Agriculture and as a member of the Council of Women World Leaders.

She had three children, Vaidotas, Rasa, and Daivita, with her first husband, before marrying Algimantas Tarvidas in 1989.

She was replaced by Gediminas Vagnorius during the Re-Establishment of the State of Lithuania.