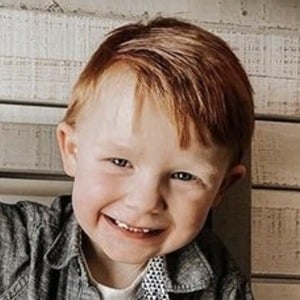 Social media star who skyrocketed to fame as a member of the YouTube family Not Enough Nelsons. His clan's mix of vlogs, skits and challenges have led to them acquiring more than 1.7 million subscribers.

His family uploaded their introductory YouTube video in December 2018.

One of his most-viewed YouTube clips is 2019's LAST TO EAT Wins!!! He was featured in a July 2020 Q&A video where he answered an array of questions for his fans. He mentioned in the video that he thinks that his red hair is super cool. He also mentioned superman as his favorite superhero.

His mother's name is Tiffany. He comes from a family of 18 and has 15 siblings. Before he was adopted, his name was Tuff Knight. His siblings are Kass, Bridger, KennaDee, Ledger, PresLee Grace, DeLayNee June, PaisLee, Luke, NayVee, SaiDee, LiLee, KassaDee, JourNee, Jaine, Trey, and ElleCee.

She is friends with KassaDee Parker.

Beckham Nelson Is A Member Of