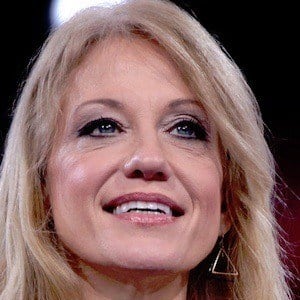 CEO and President of the Polling Company who became one of the most notable pollsters in national news. She previously worked as an attorney and practiced law in four jurisdictions. She's been featured on over 1,200 television shows for networks such as ABC, NBC, CBS, CNN, and Fox News.

She earned her bachelor's degree in political science from Trinity College, then went on to earn a law degree from George Washington University, where she was also an adjunct professor.

She has been a board member of the Clare Boothe Luce Policy Institute, Independent Women's Forum and American Conservative Union, among others.

She was the campaign manager for Donald Trump's 2016 presidential campaign.

Kellyanne Conway Is A Member Of