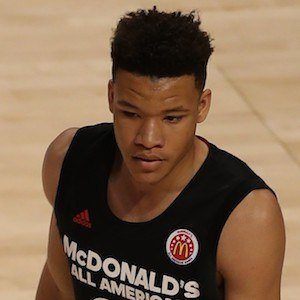 Small forward who played one year of college basketball for the University of Kentucky. He was selected 9th overall in the 2018 NBA Draft by the New York Knicks.

He grew up in Riverview, Florida and was an all-conference player for Tampa Catholic High School in 2015 and 2016.

He won the 2015 FIBA Americas Under-16 Championship and 2016 FIBA Under-17 World Championship with the U.S. national team.

He is the son of former NFL wide receiver Kevin Knox Sr. He has siblings named Kobe, Karter and Ashley.

He played with Wenyen Gabriel at the University of Kentucky.

Kevin Knox Is A Member Of