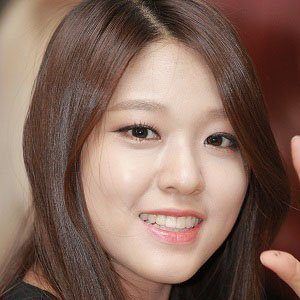 Pop singer best known as a member of South Korea's FNC Entertainment all-female pop group AOA. She is also notable for her starring roles in the television shows Ugly Alert and Orange Marmalade and in the 2015 movie Gangnam Blues.

Before recording her 2012 debut album, Angels' Story, with AOA, she trained as a singer, dancer, and pianist, and won the SMART Model Contest.

She was featured in music videos for the Korean bands F.T. Island and N.Flying.

She has a sister named Kim Joo Hyun.

In 2015, she and CNBlue drummer Kang Min-hyuk joined the cast of the KBS 2 reality TV variety series Brave Family.

Kim Seolhyun Is A Member Of