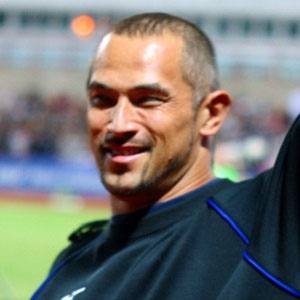 Japanese hammer throw champion who won gold at the Asian Games in 1998 and 2002 before winning his first Olympic gold medal in 2004. He is also a renowned sports scientist who began serving as the Director of the Sports Science Center at the Tokyo Medical and Dental University in 2014.

He was born in Numazu, Shizuoka Prefecture and first gained major attention by winning bronze at the 1993 East Asian Games.

When he won gold at the 2011 IAAF World Championships in Athletics, he became the oldest man ever to win the world hammer throwing title.

He and the United States' Lance Deal are both well-known hammer throwers.

Koji Murofushi Is A Member Of