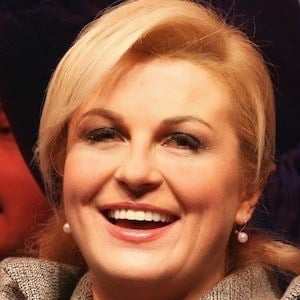 Known as the 4th President of the Republic of Croatia. Upon her election in January 2015, she became the first female to hold the position, as well as the youngest at age 46.

Her first major position in the Croatian government came in 2003 when she was appointed the first female Minister to European Affairs. She subsequently served as the ambassador to the US from March 2008 through July 2011.

She was born in Rijeka, Croatia, and raised there by her parents Dubravka and Branko. She married Jakov Kitarović in 1996; they have children named Katarina and Luka.

She succeeded former Croatian President Ivo Josipovic when she was sworn into office on February 15, 2015.

Kolinda Grabar-Kitarovic Is A Member Of