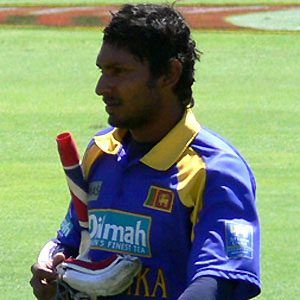 He played cricket at Trinity College, Kandy, receiving the school's highest sports award, the The Trinity Lion. He made his Test and ODI debuts in 2000.

He was known for publicly supporting sledging - the cricket version of trash-talk - to throw opponents off their game. He retired with 14,234 ODI runs, second only to Sachin Tendulkar.

He was born in Matale, Sri Lanka. His father, Swarnakumara Sangakkara, was an attorney. He married Yehali Sangakkara in 2003, and they have two kids: Kavith and Swyree.

He won the Wisden Leading Cricketer in the World award in 2011 and 2015, making him the second player, after Virender Sehwag, to earn the honor twice.

Kumar Sangakkara Is A Member Of