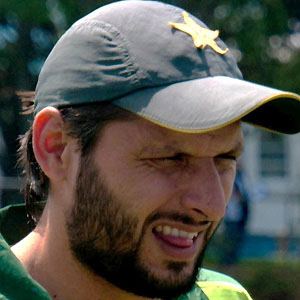 Pakistani all-rounder who became his country's Test, ODI, and T20I captain in 2010, although he only served as Test captain for one match. He retired from international cricket in February 2017, finishing with more than 10,000 runs and 500 wickets across all three formats combined.

He made his professional cricket debut with Karachi in 1995. He set an ODI record at age 16, becoming the youngest player to score a century.

He founded the Shahid Afridi Foundation in 2014. Do Something named him one of the world's most charitable athletes in 2015.

He has four children, Ansha, Asmara, Ajwa and Aqsa, with his wife Nadia Afridi.

He set an ODI record for fastest century, although it was later broken by Corey Anderson and AB de Villiers.

Shahid Afridi Is A Member Of