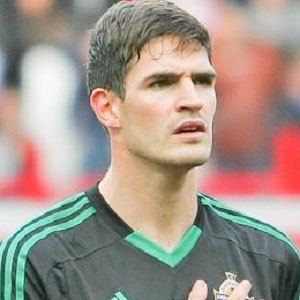 Striker who debuted for the Northern Ireland senior national team in 2006. He played for the Rangers FC from 2008 to 2012; he briefly joined Palermo in 2013 before signing a three-year contract with Norwich City in 2014. In 2017, he joined Hearts of Midlothian.

He began his youth career in 2004 with Burnley.

He scored 31 goals in 104 appearances with the Rangers FC.

He married former model Vanessa Chung in 2016. He was previously married to Miss Scotland Nicola Mimnagh.

He played under manager Ally McCoist on the Rangers FC.

Kyle Lafferty Is A Member Of