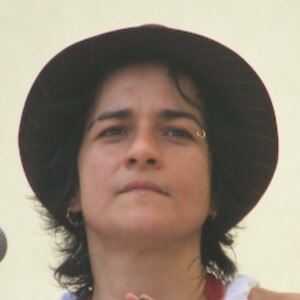 Brazilian drummer who was born Elaine Silva Moreira, but is best known by her stage name Lan Lanh. She formed the band Rabo de Saia while she was in university. After signing with Wea Music, they gained a cult following in the 80's. She went on to form Lan Lan and the Elaines, and then joined Emanuelle Araujo's band Windmill in the early 2000's.

Her parents are Ilsio Moreira, an industrial scales technician, and Célia Maria, an artist. She has two sisters. She formed a relationship with the actress Nanda Costa in 2014.

She has worked with artists like Marisa Monte, Carlinhos Brown and Cyndi Lauper.

Lan Lan Is A Member Of