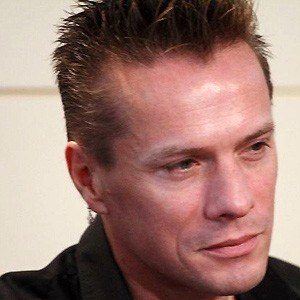 Drummer and a founding member of the Irish rock band U2 who rides a Harley Davidson.

Joe Bonnie taught him how to play drums when he was nine years old. He was later the one to place the ad that assembled the members of U2.

Mullen and U2 have won more than sixty awards, including twenty-two Grammy Awards.

He and his girlfriend Ann Acheson have been living together for more than thirty years. They have three children together.

He is bandmates with U2 frontman Bono.

Larry Mullen Jr. Is A Member Of