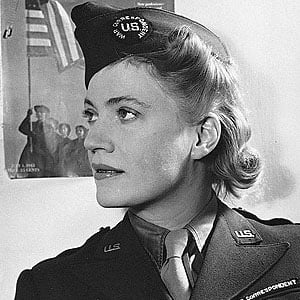 Remembered for her World War II-era photojournalism for Vogue magazine, this 20th-century photographer also became known for her works of surrealist and fashion photography.

In her late teens, she had a chance meeting with Vogue magazine founder Conde Nast -- he prevented her from stepping in front of a moving car in New York City -- that began her early, highly successful career in modeling and paved the way for her later work as a Vogue war photographer.

During the late 1940s, haunted by childhood trauma and by the images she had taken of concentration camps, she suffered from episodes of depression and post-traumatic stress syndrome.

She and her brothers John and Erik grew up in Poughkeepsie, New York. Her first marriage was to an Egyptian railroad executive named Aziz Eloui Bey; she later married English surrealist artist Roland Penrose. Her one child, Antony Penrose, also became a photographer.

A contemporary and friend of Pablo Picasso, she photographed the renowned artist for her second husband's biography of Picasso.

Lee Miller Is A Member Of