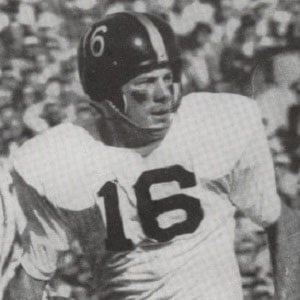 Hall of Fame quarterback who led the Kansas City Chiefs to three AFL titles. He then signed on as a color analyst for the Chiefs radio network.

He had a remarkable sophomore year at Purdue, leading the NCAA in pass efficiency while also playing defense and serving as Purdue's kicker.

In Super Bowl IV, he led the Chiefs to a 23-7 victory over the Minnesota Vikings, and he was named MVP of the game.

He fathered two children, Lisa Anne and Len Jr., with his wife, Jacqueline Puzder. After Jacqueline's death in 1978, he married his second wife, Linda.

He and Joe Montana both ended their NFL careers playing quarterback for the Chiefs; Montana, however, only played one season with the team.

Len Dawson Is A Member Of