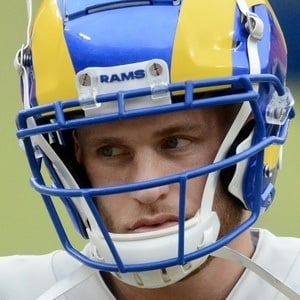 Wide receiver who began his NFL career with the Los Angeles Rams in 2017 after being a third round draft pick out of Eastern Washington University. He had a historic season in 2021-22 as he caught 145 passes for 1,947 yards and 16 touchdowns, leading the league in each statistic. He scored the game-winning touchdown in the Rams' victory in Super Bowl LVI and he was named Super Bowl MVP for the game.

He played football and basketball for the Davis High School Pirates in Yakima, Washington.

He was a two-time Big Sky Offensive Player of the Year at Eastern Washington and in 2015, he broke the Big Sky Conference single-season record for catches with 114.

He married Anna Croskrey in 2015. His father is former NFL quarterback Craig Kupp.

He was teammates with quarterback Jared Goff on the Rams from 2017 to 2020.

Cooper Kupp Is A Member Of