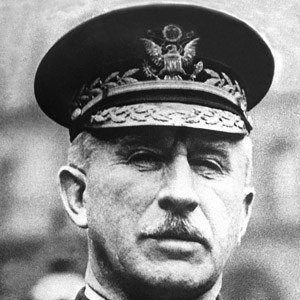 Physician and Army Chief of Staff from 1910 to 1914 who served in the Apache Wars, the Spanish-American War, and the Philippine American War.

He fought in the last campaign against Geronimo in 1886, and was awarded the Medal of Honor for his efforts.

He was the personal physician to Presidents Grover Cleveland and William McKinley.

He descended from four Mayflower passengers who all signed the Mayflower Compact. His brain is being held at the Yale School of Medicine in its historic collection.

At the outbreak of the Spanish-American War, he and Theodore Roosevelt, organized the 1st Volunteer Cavalry regiment, popularly known as the Rough Riders.

Leonard Wood Is A Member Of