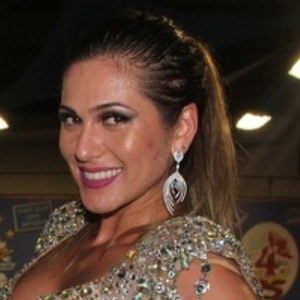 Model, actress, and television host who is best known for her work as a presenter on a variety of SBT original programs including Focalizing, Teleton, and SBT Arena. She is also known for sharing additional modeling shots to her Instagram where she has over 9 million followers.

Her career in entertainment began when she was 13 and started modeling. After several publicity campaigns, she went on to television and in 1997 she made he debut appearance as a stage assistant for the Fantasia program on SBT. She broke into the mainstream in 2000 when she was a part of the group Mallandrinhas on Festa do Mallandro.

She was featured on the cover of Playboy as a model in September of 2001 and also the cover of Sexy in August of 2003.

She was born and raised in Sao Paulo, Brazil. She married businessman Fagnani Nilton Junior from 2004 until 2014 and in 2015 she remarried but kept the name of her husband private from the public.

She starred alongside Larissa Manoela and Maisa Silva in the 2012 Brazilian telenovela Carrossel.

Livia Andrade Is A Member Of