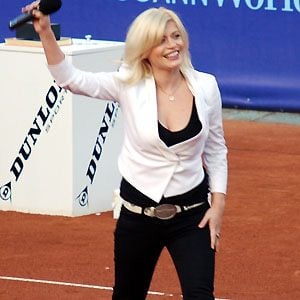 Romanian pop star who released her nineteenth album with Apa in 2012 and who released the hit single "Bună seara." She later became a coach on the Romanian version of The Voice.

She started performing at age three and was discovered at age fourteen.

She has also developed a career as an actress with roles in the late 2000's films Regina and Fire and Ice: The Dragon Chronicles.

She has a daughter named Elena with Romanian television producer Andrei Boncea, whom she married in 1998.

Loredana Groza Is A Member Of