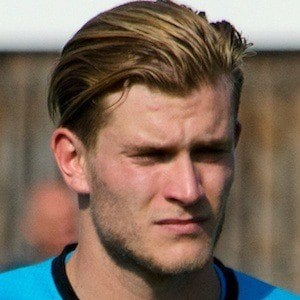 Goalkeeper who gained widespread renown for his play as the starter for German Bundesliga club Mainz 05; in 2016 he would join Liverpool. He was voted the league's 3rd best goalkeeper following the 2015-2016 season on its official website.

He began his youth soccer career in 1998 as a member of FV Biberach. He was signed to Manchester City's youth program in 2008, following his play with the German national U16 club.

He signed a lucrative contract with English Premier League club Liverpool in May 2016. He was awarded the #1 jersey.

He was born and raised in Biberach an der Riss, Germany.

He befriended pop singer Justin Bieber during the summer of 2015 while vacationing in Miami, Florida.

Loris Karius Is A Member Of