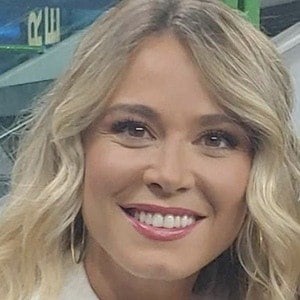 Famous Italian journalist and TV presenter who first became known as the weather reporter on Sky 24. She later went on to become a sports reporter for Sky sports. Her journalistic fame has helped her to accumulate over 8 million followers on her dilettaleotta Instagram page.

She first got her start as a presenter for Antenna Sicilia at the age of 14. In 2009, she became presenter of the sports program Salsatampa, the Sunday Sport Siciliana.

She was a pre-finalist for National Miss Italy in 2009. She was also voted TV face of year by La Gazette hello Sport in 2015.

She was born and raised in Sicily, Italy. Despite all of her accomplishments as a reporter, she went on to study law at Luiss Guido Carli University in Rome. She and actor Can Yaman have been in a relationship.

She made her acting debut alongside Italian actress Donatella Finocchiaro in the 2009 film Lost Kisses.

Diletta Leotta Is A Member Of