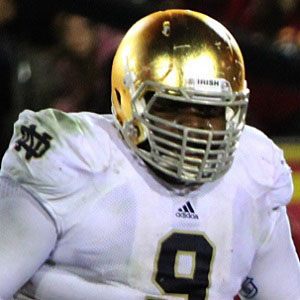 Defensive tackle who was selected 83rd overall in the 2014 NFL Draft by the Houston Texans. He earned the nickname "Irish Chocolate" during his standout collegiate career at the University of Notre Dame.

He was a four-star recruit coming out Jacksonville's William M. Raines High School and chose to attend Notre Dame over all of the local Florida universities including Miami, Florida State, and Florida.

He was forced to miss the final couple games of his senior season at Notre Dame with a torn meniscus.

He played his college ball under head coach Brian Kelly.

Louis Nix Is A Member Of