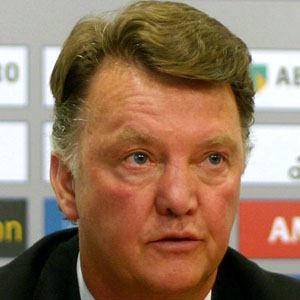 Former midfielder who scored 26 goals in 248 appearances for Sparta Rotterdam from 1978 to 1986. He became an accomplished manager after retirement, taking the helm of teams like Barcelona, Bayern Munich, Ajax, and Manchester United.

He debuted professionally for Ajax in 1972. He landed his first head managing job with Ajax in 1991.

He won five league titles in six seasons as a manger from 1993-1999, the first three with Ajax in the Eredivisie and the last two with Real Madrid in La Liga. He's also managed the Dutch national team.

He was married to Fernanda Obbes until her death in 1994; they had two daughters. He married Truus van Gaal in 2008.

He became Arjen Robben's manager on the Dutch national team.

Louis van Gaal Is A Member Of