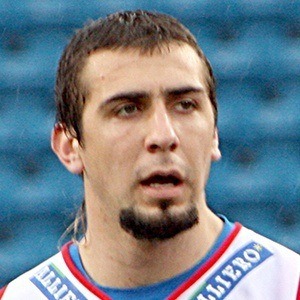 Striker who was named 2014's Footballer of the Year of Argentina for his stellar season with Vélez Sarsfield. He debuted for the Argentine national team during the squad's 2018 FIFA World Cup qualification run.

He spent most of his early years in the Altos de San Lorenzo neighborhood of La Plata, Argentina.

He is a huge fan of the Argentine rock band La Renga and has a tattoo of the group.

He has an older brother named Leandro. His daughter Pia was born in 2010.

He has been teammates with forward Rodrigo Mora at River Plate.

Lucas Pratto Is A Member Of