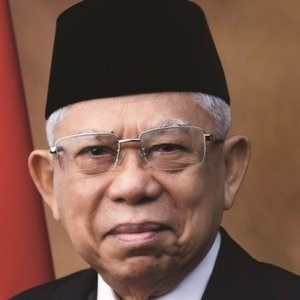 Indonesian politician best recognized for having served as Vice President under the leadership of Joko Widodo. He is also known for having previously served as the Chairman of the Indonesian Ulema Council in August of 2015.

He studied Islamic philosophy at Ibnu Khaldun University in Bogor, West Java. He then carried out Dakwah missions in Jakarta. He started his career in politics working as an advisor to Abdurrahman Wahid and the National Awakening Party.

He is also recognized for having served as the Supreme Leader of the Nahdlatul Ulama from August of 2015 until September of 2018.

He married Wury Estu Handayani in 2014 and has 8 children.

He is also known for having previously served as an assistant to President Susilo Bambang Yudhoyono during his Advisory Council from 2007 until 2014.

Ma'ruf Amin Is A Member Of