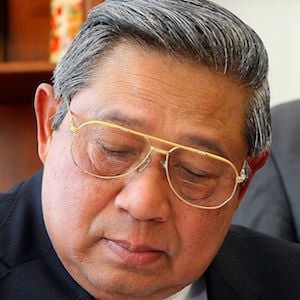 Best known as being the President of Indonesia from 2004 through 2014. Following his tenure as president, he continued serving as the president of the Democratic Party of Indonesia.

He graduated from the Indonesian Armed Forces Academy (AKABRI) in 1973 as a second lieutenant. He completed US Army Ranger training in the US in 1975 to further his English proficiency.

In 2007, he brokered a free trade agreement between Indonesia and Japan as president of the former. In 2009, he was listed in TIME Magazine's annual issue of the 100 Most Influential People in the World.

He was born and raised in Pacitan, Indonesia. He married Ani Yudhoyono and he has two children, Agus Harimurti and Edhie Baskoro.

He ran alongside Jusuf Kalla, his vice presidential nominee, during Indonesia's 2003 elections.

Susilo Bambang Yudhoyono Is A Member Of