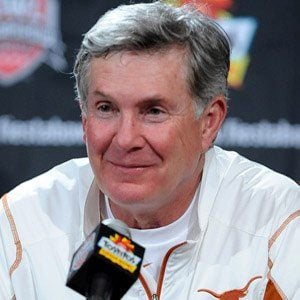 Head football coach who began his long tenure at the University of Texas in 1998. He led the team to a BCS National Championship in 2006 behind the quarterback play of Vince Young.

He played running back at Vanderbilt and Florida State.

He and his wife organized a blood drive on the UT campus to help victims of the Texas A&M bonfire tragedy.

He had two brothers named Melvin Jr. and Watson. He married Sally Brown in 1992 and he has four children: Katherine, Matt, Chris and Barbara.

He made a cameo appearance on Friday Night Lights, where Kyle Chandler's character was compared to him.

Mack Brown Is A Member Of