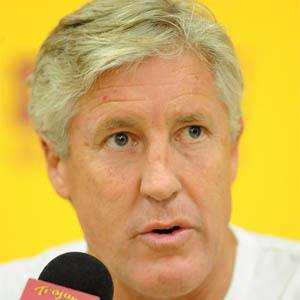 Head football coach on both the college and professional level who led the University of Southern California Trojans to the AP Championship in 2003 and BCS Championship in 2004 and coached the Seattle Seahawks to victory in Super Bowl XLVIII. He became just the third coach in football history to win both a college football national championship and a Super Bowl.

He was a star athlete at Redwood High School in Larkspur, California, playing quarterback, wide receiver and defensive back as well as competing in basketball and baseball.

His first NFL head coaching job was with the New York Jets in 1994, but after going 6-10 in his first season, he was fired.

He met his second wife Glena Goranson while he worked on the coaching staff at the University of the Pacific. Before marrying Glena in 1976, he was married to Wendy Pearl from 1973 to 1975. He has two sons named Brennan and Nathan and a daughter named Jaime.

Pete Carroll Is A Member Of