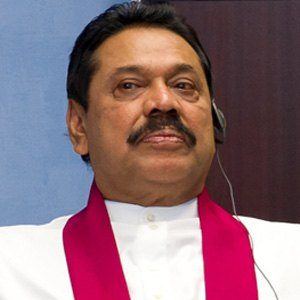 Lawyer who became the 6th President of Sri Lanka and Commander in Chief of the Sri Lankan Armed Forces in 2005.

He was the winner of Sri Lanka's first election after decades of civil war, and he won in a landslide, defying predictions of a close race.

While he managed under his rule to quell the country's restive Tamil Tiger militant group, he was accused in doing so of overstepping his limits.

He was born into a prominent Sri Lankan political family, and followed in his father's footsteps to lead the Sri Lanka Freedom Party.

Julian Assange's Wikileaks organization revealed that Mahinda was behind the massacres of Tamil civilians and captured fighters near the end of he war.

Mahinda Rajapaksa Is A Member Of