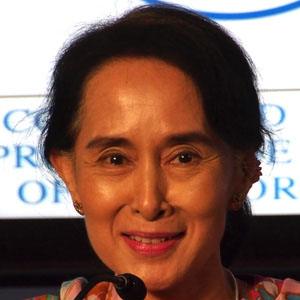 Leader of the Burmese political party National League for Democracy who was awarded the Nobel Peace Prize in 1991 for her advocacy of nonviolent resistance. She was elected to the lower house of the Burmese parliament in 2012.

In 1991, after her NLD party seemingly won the Burmese election, the reigning military junta put her under house arrest, hoping to marginalize her.

She became the first woman to serve as Minister of Foreign Affairs of Myanmar.

Her mother, Khin Kyi, was also a prominent political figure in the newly-formed Burmese government after the country gained its independence from Britain. She had two children with ex-husband Michael Arts.

She has been compared to Nelson Mandela in the unwavering commitment to reform her country's government, and the long imprisonment she suffered as a result.

Aung San Suu Kyi Is A Member Of