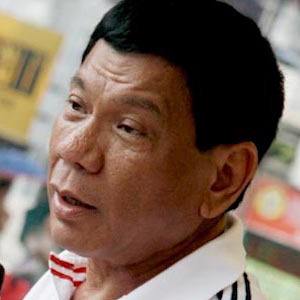 Became the 16th President of the Philippines in 2017. He has earned the nickname "The Punisher" for his controversial zero-tolerance law and order policy against criminals. Before being elected president, he served as mayor of Davao City for more than 20 years and 7 terms.

He graduated from Lyceum of the Philippines University in 1968 with his bachelor's degree. Subsequently, in 1972, he obtained his law degree from San Beda College of Law.

He declined the nominated for the World Mayor Prize in April 2014. In June 2015, due to his law & order policies against criminals, his jurisdiction of Davao City was ranked as the 4th safest city in the world.

His father, Vicente, was a lawyer, and his mother, Soledad, was a civic leader. He had three children with his former wife Elizabeth Zimmerman. He then had a daughter with his girlfriend Cielito Avanceña. One of his daughters is politician Sara Duterte.

He was offered the position of Interior Secretary by president Benigno Aquino III, but ultimately turned it down.

Rodrigo Duterte Is A Member Of